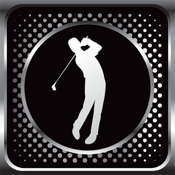 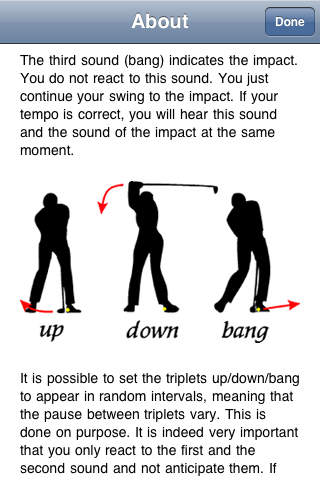 Improve your game by learning a proper golf swing tempo.

A good tempo is long known to be one of the most important golf swing characteristics, which differentiate a pro golf player from an average. It was believed that each player had to find his own swing tempo. John Novosel and John Garrity (http://www.tourtempo.com/) demonstrated that all tour players have the same 3:1 tempo, where three units represent time from the beginning of the backswing to the top and one unit represents time from the beginning of the downswing to the impact. The only thing that varies from player to player is the speed.

If you learn to swing with the good 3:1 tempo, your swing can be greatly improved. This statement was also confirmed in the study “Towards a Biomechanical Understanding of Tempo in the Golf Swing" by Robert D. Grober from Yale University.

This application can help you establish a good swing tempo. All you have to do is take your iPod/iPhone with you to the driving range and listen to sounds of the chosen tempo. The sounds are recorded in triplets up/down/bang. You can choose from different sounds according to your taste. Their meaning is always the same.

The first sound (up) indicates the beginning of your swing. When you hear it, you have to react by backswinging immediately. The reaction time is already taken into account.

The second sound (down) indicates the beginning of your downswing. You change the direction of the swing (beginning with your hips) immediately after you hear this sound.

The third sound (bang) indicates the impact. You do not react to this sound. You just continue your swing to the impact. If your tempo is correct, you will hear this sound and the sound of the impact at the same moment.

It is possible to set the triplets up/down/bang to appear in random intervals, meaning that the pause between triplets vary. This is done on purpose. It is indeed very important that you only react to the first and the second sound and not anticipate them. If the sounds are played in regular time intervals, it would be possible to anticipate them and begin backswing and downswing too soon. This might produce a wrong tempo.

In the application settings, you can first choose one among three different tempos: slow, medium, and fast. Secondly, you can use the already existing application sounds. For each of the tempos, you can either turn on/off voice, background music, or random appearance of triplet intervals.

If you do not like any of the available sounds in the application, you can record your own sounds and upload them to your iPhone. Moreover, if you happen to own the DVD "Tour tempo", you can also transfer John Novosel sounds to your iPod music library and use them in the application. However, the original sounds from John Novosel are repeated at regular time intervals, so it is more likely that you will not only react to them, but rather anticipate them once you catch the rhythm of the repetitions.

To choose your own sounds, simply turn on the “Custom sounds” switch in settings. Three buttons appear for each tempo. By pressing any of the buttons, a list of all the recordings appears. Chose one, acoording to the tempo button you pressed, and click done. Go back to the main view and press the start button. You are ready to practise your swing.