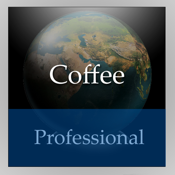 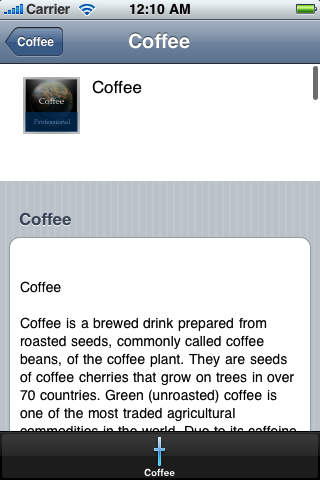 ---- YOU CAN FIND THE INFORMATION CONTAINED IN THIS APPLICATION VIA THE NET AT WIKIPEDIA.COM----

Coffee is a brewed drink prepared from roasted seeds, commonly called coffee beans, of the coffee plant. They are seeds of coffee cherries that grow on trees in over 70 countries. Green (unroasted) coffee is one of the most traded agricultural commodities in the world. Due to its caffeine content, coffee can have a stimulating effect in humans. Today, coffee is one of the most popular beverages worldwide.

It is thought that the energizing effect of the coffee bean plant was first recognized in Yemen in Arabia and the north east of Ethiopia, and the cultivation of coffee first expanded in the Arab world.The earliest credible evidence of coffee drinking appears in the middle of the fifteenth century, in the Sufi monasteries of the Yemen in southern Arabia. From the Muslim world, coffee spread to Italy, then to the rest of Europe, to Indonesia, and to the Americas. Coffee has played an important role in many societies throughout history. In Africa and Yemen, it was used in religious ceremonies. As a result, the Ethiopian Church banned its secular consumption until the reign of Emperor Menelik II of Ethiopia.It was banned in Ottoman Turkey during the 17th century for political reasons, and was associated with rebellious political activities in Europe.