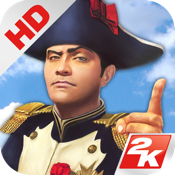 Redesigned for the iPad! - Build. Discover. Conquer. Rule the World!

LEAD YOUR PEOPLE TO GREATNESS:

Choose your victory path: military, cultural, economic or scientific. However you choose to lead your people, there’s a way to win.

Choose from 16 Civilizations throughout history (including America, Spain, China, Japan and Germany) to lead to victory.

Triple your strength by combining up to three units into one powerful army and destroy your enemies. Level them up through military victories to gain additional strength and new abilities.

Multiple difficulty levels, an integrated tutorial and friendly advisors are all here to help newcomers and seasoned Civ veterans alike.