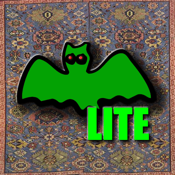 No shooting, no killing soldiers. Just a simple bat runs after his food. A very fast paced reflex game.
- Global high scores
- trophy system
- special combos to collect
The gameplay:
You have 30 (sometimes more) seconds to collect the butterflies and dragonflies. You have to collect a minimal amount to finish the level successfully. If you let too many bugs escape, you fail. If you catch the bugs, you win.
- Retro control system
You can only use the sides of the screen to move the bat. You tap the iphone on the left - the bat will fly there and eats all the bugs up on his way. You tap the iphone on the right - the bat flies back. You can move him up and down on the side, and also recall him back on the same side while he is flying.
- One life
- Instant death
- Enemy in watch/attack state
You have one enemy: The bird. Well, it's an eagle but that's just a bird isn't it. He starts watching you quite often. Then, he starts to attack. If he catches you - you are dead. You can fly over him while he is just watching.
- speed trophy
- no escape trophy
- combo trophy
You can collect three trophies for each level. If you finish your target on time,you receive a speed trophy. If you catch nearly all bugs, you receive a no-escape trophy. If you collect a three bug combo, you receive a combo trophy
- RGB trophy
You have to collect three bugs. One red, one green and one black. In one row. Without flying to the trees to rest.