Mall Of The Emirates 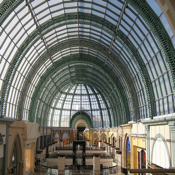 The Mall of Emirates is a shopping mall in Dubai, United Arab Emirates. It contains approximately 2,400,000 square feet (223,000 m2) of shops and the entire mall forms a total of approximately 6.5 million square feet.

Although it features the usual amenities for a mall (a fourteen-screen movie theater, a gaming arena, a typical variety of stores, and a dramatic theater), its biggest claim to fame is the Middle East's first indoor ski slope, Ski Dubai. With the ski area, one of the largest in the world, the Mall of the Emirates seeks to differentiate itself from the dozen or so other newly completed malls in Dubai and the surrounding emirates. Half of the mall opened in September 2005, then officially opened in late November 2005 with the inauguration of the ski area, although it had already been in operation for several weeks.

The Mall of Emirates APP provides users with a reference to stores within the Mall.

Users can do the following activities within the APP:
• Access the Map of the mall with zooming capability
• Access details of a specific store, including the ability to dial the store phone number directly from the APP and/or access the website of the store
• Select favorite stores

The APP is for the purpose of reference only and provides tourists/visitors to the Mall information about the retail outlets in the Mall.