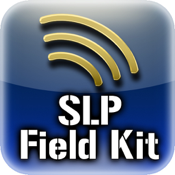 SLP Field Kit aids the Speech and Language Pathologist and Speech Therapist in the field with testing and building phonemic awareness and auditory discrimination (this module covers consonants).
► Going beyond just replacing card decks and flash cards, SLP Field Kit incorporates 8 powerful interactive activities that add dynamic training experiences that challenge and focus your clients. Traditional card decks have been difficult to sort into multi-card activities. Now, at the touch of a button, the cards are presented in powerful combinations that truly focus the client.
► In addition, SLP Field Kit incorporates phoneme buttons as part of the activities, something cards could never do.
► The recorded speech provides stability of pronunciation that promotes consistency in testing.
► 361 audio word cards, which are spoken words illustrated by photographs and drawings along with the text of the words (the text is hidden when appropriate)
► 8 progressively difficult activities to build and to test phonemic awareness
► 198 lessons
► Over 3000 exercises
► Records scores and sends them to email
► Select between International Phonetic Alphabet and the English /sound/ notation

2 WHICH PHONEME IS IN THE WORD?
In this activity, phonemes are grouped in fours or twos according to their general ‘place’: bilabial, dental, alveolar, post-alveolar, palatal, velar, and glottal. After selecting a group, a word card (without text) containing one of the phonemes from the group is shown along with the phoneme buttons. Example: Which phoneme /p/, /b/, /m/, or /w/ is in the word ‘bead’? The client selects the phoneme in the word. This activity hones auditory discrimination for phonemes initiated from the same general ‘place’. (Morais, 2003)

4 IS THE PHONEME AT BEGINNING, MIDDLE OR END?
This exercise shows a single word card with a phoneme button. The client selects from three buttons: ‘beginning’, ‘middle’, or ‘end’. Example: Is the sound /n/ at the beginning, middle, or end of the word ‘money’? (Post 2007)

5 CHOOSE SIMILAR WORD BY HEARING THE WORD
This exercise shows two word cards as minimal pairs, and a button with the audio target word. Example: Which card is ‘bear’(spoken)? Is it ‘bear’ or ‘pear’ (visual and spoken word cards). The client selects the word card that contains the target word. (multisensory matching, Senkowski 2009)

6 WHICH PHONEME IS IN BOTH WORDS?
In this activity, two word cards containing one common phoneme are shown. The client must choose from 4 (or 2 for /h/ and /hw/) phoneme buttons. Example: Which phoneme /p/, /b/, /m/, or /w/ is in both words 'bead' and 'chubby'?

7 WHICH SIMILAR WORD CONTAINS THE PHONEME?
This exercise shows two word cards as minimal pairs, and a button with the audio target phoneme. Example: Which card contains /b/; ‘bear’ or ‘pear’? The client must select the word that contains the target phoneme.

8 FLIPBOOK FOR YOUR ACTIVITY
This exercise displays a single word card (with text) and a phoneme button, along with a ‘correct’ and an ‘incorrect’ button. It allows the clinician to create custom activities.

To the standard 24 consonant phonemes of American English, /nk/ and /hw/ have been added for the purpose of creating minimal pairs with /ng/ and /h/ respectively.