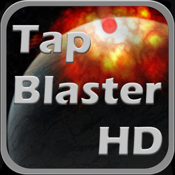 Fight through an endless single player mode or face off head-to-head against a friend in two-player!

Get ready for the ultimate intergalactic battle.

In Tap Blaster HD, no one can hear you scream as you fight off an alien planet in a battle royal so big, only space is large enough to handle it. Fight through an endless single player campaign against increasingly tough opponents or duke it out against a friend in two player versus mode.

Designed with revolutionary touch controls in mind, Tap Blaster HD pushes you to the edge as you defend your planet while also sending futuristic projectiles at your opponent. It's fast, furious, full of action, and will keep you coming back for more.

Rules of Tap Blaster HD are simple: defend your home planet while tapping on the screen to send a projectile toward the alien planet. First person to destroy the others planet wins. Be offensive and think out a great strategy, but don't leave yourself open for attack!