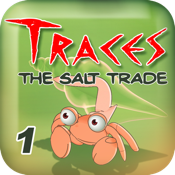 Everyone dreams about time travelling. Everyone would like to be the master of time. Going to and fro in time is a dream so old as human mankind itself.

TRACES takes you there, on an amazing time traveling adventure full of surprises from Present time into the Past and back again.

In Present time, near the Village of Cat-Mountain, the drilling of a tunnel for a High Way uncovers a cave with historical remains. More worrying then the cave itself, is the content of it… a great number of skeletons… Even more worrying is the fact that a black crow with a red spot under his left eye seems to defend the entrance to this cave.

Two kids, Carla and Toni in search of Oni, Carla’s cat follow the cat and the crow into the cave. Here Carla and Toni cross the border from the Present to the Past Time . Accidently they travel 400 years back and discover a beautiful island with the authentic culture of the Aboriginals as well as the cruel habits of the invading colonizers. The cat and the crow travel along with Carla and Toni into he Past. Unlike Carla and Toni they change their form during the transition. The cat transforms into Ona, the female hero and incarnation of the good forces. The crow metamorphoses into Corbu, the cruel governor of the island and incarnation of the evil forces.

In Past time ,Toni and Carla accidentally get involved in the struggle between good and bad. Ona, with her knowledge of ancient magic, helps the Aboriginals to fight against the foreign invaders, the Three-eyed Corbu and his Red-hair soldiers. Toni and Carla can use their modern knowledge to help the oppressed people of the 17th century. They also learn from the ancient inhabitants the importance of respecting nature and protecting the environment.

Archeological mysteries will deliver the secrets of the past. The two children will learn from past time how to master their problems in the present time and how create a better future for all of us.

TRACES invites you to join Toni and Carla, and to shiver and shudder with them on their great time traveling adventure.

Toni, a young boy, accompanies his archaeologist father to the town of Cat Mountain. There, he meets the cute and lively daughter of the innkeeper, Carla.

By chance, the two of them break into the archaeological site and disappear into one of the archaeological caves, but no one knows what really happened. Actually, Toni and Carla accidentally embark on a time traveling adventure! The cave is magically connected to the tunnel of time, which brings them back to the world of four hundred years ago.

In the past there exists two forces. Ona is a hero who watches over the ancient Aboriginal people. She leads the Aboriginal people to defend themselves against the plundering of Corbu. Corbu is an evil, greedy invader. He uses military forces to control the Aboriginal’s sea salt resources. In addition to powerful firearms, Corbu also has terrible black magic.

Toni and Carla, having just arrived in the past, haven’t had the time to grasp their situation when Carla is captured by some horrible No-Faces. Toni, who escapes alone, meets the cat woman, Ona. He asks Ona and the Aboriginal tribe for help. Facing the evil powers of Corbu, Ona plans to break into Corbu’s lair and crumble his forces in one swoop.

In this battle of good and evil, how can Toni and Carla help the Aboriginal people fight back Corbu’s evil magic? Will they be able to find the way home?