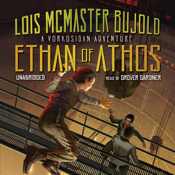 Ethan of Athos by Lois McMaster Bujold (unabridged) was produced by Blackstone Audio and comes with what is perhaps the best audiobook app available (see below for features list).

Dr. Ethan Urquhart is chief of biology at a District Reproduction Center. He delivers babies from uterine replicators. You see, on Athos there are no women. In fact, the planet is forbidden to them. Isolated from the galactic community by distance and a lack of exploitable resources, the Athosians have peacefully lived their peculiar social experiment for two hundred years. But now, the ovarian cultures dating back to the original settlement of the planet are giving out.

With the future of Athos at stake, Ethan is chosen on behalf of his cloistered fellows for a unique mission: to brave the wider universe in quest of new ovarian tissue cultures to replenish Athos' dwindling stocks. Along the way, he must tangle with covert operatives, killers, telepathy, interplanetary politics, and—perhaps most disturbingly—an indomitable female mercenary named Elli Quinn.

NOTICE: This app includes the same 5-star recording that is available through other retailers for higher prices. It is unabridged and professionally recorded at Blackstone Audio and read by Grover Gardner, who has been named one of the “Best Voices of the Century” and a Golden Voice by AudioFile magazine, he won the prestigious Audie® Award in 2009, and was chosen Narrator of the Year for 2005 by Publishers Weekly. You are not buying yet another amateur or volunteer narration. No clicks, background noises, throat clearing, mispronunciations, tinny voices or monotones will be found here.

• EXPERIENCE. About 7 hours of narration. Created as a Folium enhancedAudio™ edition, this book includes extra functions and features not found on lesser players.

RATING: 12+ For mild violence, and some mature themes.

___________________
Set in Bujold’s Vorkosigan universe, this independent novel follows a doctor as he braces himself for his first encounter with that most alien of aliens—a female of his own species.