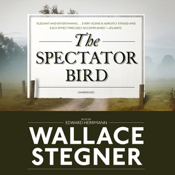 THE SPECTATOR BIRD by Wallace Stegner (unabridged) was produced by Blackstone Audio and comes with what is perhaps the best audiobook app available (see below for features list).

Joe Allston is a retired literary agent who is, in his own words, “killing time before time gets around to killing me.” His parents and his only son are long dead, leaving him with neither ancestors nor descendants, tradition nor ties. His job, trafficking the talent of others, had not been his choice. He passes through life as a spectator. But a postcard from a friend causes him to return to the journals of a trip he had taken years before. The memories of that trip to his mother’s birthplace move through layers of time and meaning and reveal that Joe Allston isn’t quite spectator enough.

NOTICE: This app includes the same 5-star recording that is available through other retailers for higher prices. It is unabridged and professionally recorded at Blackstone Audio and read by Edward Herrmann, who has won multiple Earphones and Audie® Awards, and his narration of the King James Version of the Bible remains a benchmark in the industry. You are not buying yet another amateur or volunteer narration. No clicks, background noises, throat clearing, mispronunciations, tinny voices or monotones will be found here.

“Elegant and entertaining.. . Every scene is adroitly staged and each effect precisely accomplished.” —Atlantic

• EXPERIENCE. About 8 hours of narration. Created as a Folium enhancedAudio™ edition, this book includes extra functions and features not found on lesser players.

RATING: 9+ For some mature themes.