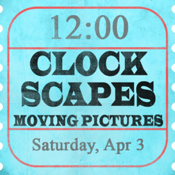 A clock application for your iPad like nothing else in the store! Clockscapes Moving Pictures turns your iPad into an animated display that beautifully shows off your iPad when it's not in use!

There are currently six different moving pictures to choose from. Each scene contains animated features to create a depth of field that will make you feel like you are actually there! With the HD screen on the iPad of 1024X768 these scenes look absolutely amazing and they can be viewed in both portrait and landscape modes!

So, go ahead, buy your ticket and choose from any of the following moving pictures now showing on Clockscapes:

Clockscapes Milky Way
Get lost in this absolutely stunning photo produced by the European Southern Observatory of our Milky Way! With several layers of animated stars moving by you'll feel like you're a floating observer as time and space meet!

Clockscapes Around The World
Take a trip around the world! Enjoy watching the animated airplane fly over the entire world map. As the map passes by the screen, each country and its name are clearly visible and accurate as of 2010. "If you look out the window, we're now flying over..."

Clockscapes Utah
Monument Valley in Utah is one of the most amazing landscapes in the U.S. This photograph really does it justice showing the magnificent size of the unique rock formations! The animated hot-air balloons can be turned on and off with the touch of a button.


Clockscapes Titanic
If the Titanic was a big deal when it came out, the iPad is even bigger...except, this beauty won't sink! The display of the iPad is perfect to show off the splendor of the Titanic! Enjoy it slowly moving by you as it dodges those pesky icebergs! We promise, this ship will stay afloat!

Clockscapes New York City
Enjoy this beautiful panoramic scene of the New York City skyline! Easily identify the famous buildings and skyscrapers for your next visit!

Clockscapes Carina Nebula
The Hubble telescope has given us a window into the vast universe like never before! This photo of the Carina Nebula will leave you speechless as you wonder what is out there in the universe. The animated stars add to the depth of field like you're actually there experiencing this little known wonder!

Thank you for coming to see Clockscapes Moving Pictures! What you see here is just the beginning. Our producers are working hard on many more entertaining scenes to be added to the Clockscapes library. So take advantage of this introductory price now and you will get the updates free of charge as they are released.

Now, pull up a chair, sit back, and enjoy the show!

Note: This is an application, not a replacement home screen for the iPad.