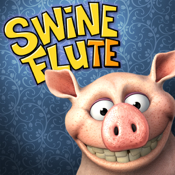 SwineFlute HD is a 3-D hog that opens the barn doors of music for kids. They play a musical pig that jiggles out notes when they cover holes on his back with their fingers.

They can make other great sounds by stroking his head and tail or by shaking the phone. They can play along with one of six songs:
• The Potbelly Waltz
• Moonshine Madness
• Ridgeback Rock
• Swine Country
• Cream Corn Shuffle
• Hog town Blues

Life is full of rules. Use your napkin. Chew with your mouth closed. Don’t touch the fan. Your sister’s face is not a toy!

When did you become your parents? Shouldn’t being six have an element of fun? May we recommend Swine Flute? It’s an app that kids love. It looks like a pig with 3D holes on his back. When little fingers cover the holes, notes wiggle out of this happy oinker. You can also twang his tail, thump his head, and stroke his belly for extra fun sounds. Wait until Cooper or Madison shakes the whole phone. The laughs will make the grumpiest of gramps grin.

Kids can play along with one of six songs or nine beats. Songs like the Potbelly Waltz and beats like Armpit Farts. Tell us that won’t bring the barn down. Swiny makes real music. Kids learn and have fun without you worrying about the long-term psychological impact of mowing down zombies with a shotgun in an abandoned meat packaging facility run by aliens. You might even get something done while they’re writing their first song, I Won’t Eat Peas. Don’t worry. There’s no learning curve for anyone under the age of….how old are you? Ask the kids. They’ll show you how.

Swine Flute. Ever see your kid turn the TV off? Swine Flute is available for the iPhone, iPad and iPod Touch.

Swine Flute is another cracked concoction from the entropic collaborative composed of Propaganda3 and Bazillion Pictures.