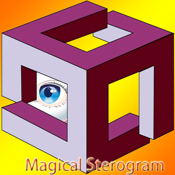 A collection of 60 magical sterograms. When you look into them, you will be like walking into a wonderland that has never seen in the real world.
Watching these sterograms will not just an ordeal of your eye sight, but of your patience and intelligence.
More sterogram images and functions will be added to this application. Surely it won't let you down. Welcome to the magical wonderland!
A stereogram is an optical illusion of depth created from flat, two-dimensional image or images. Originally, stereogram referred to a pair of stereo images which could be viewed using astereoscope. Other types of stereograms include anaglyphs and autostereograms. The stereogram was discovered by Charles Wheatstone in 1838. He found an explanation ofbinocular vision which led him to construct a stereoscope based on a combination of prismsand mirrors to allow a person to see 3D images from two 2D pictures. Oliver Wendell Holmes, Sr. invented an improved form of stereoscope in 1861, which had no mirrors and was inexpensive to produce. These stereoscopes were immensely popular for decades.
Stereograms were re-popularized by the creation of autostereograms on computers, wherein a 3D image is hidden in a single 2D image, until the viewer focuses the eyes correctly. The Magic Eye series is a popular example of this. Magic Eye books refer to autostereograms asstereograms, leading most people to believe that the word stereogram is synonymous with autostereogram. Salvador Dalí created some impressive stereograms in his exploration in a variety of optical illusions. One of the most common ways to create a stereogram is to hold both of your index fingers in front of you with the tips touching and cross your eyes to create the illusion that you have an extra finger.
1. Pick a spot on the picture (the middle seems to work best) and just stare at it.
2. Allow your eyes to relax, don't just stare AT the image, try to stare "through" it. You'll notice your eyes will go slightly out of focus. This is normal.
3. Keep staring, don't give up, once you begin to see the first image, it gets much easier.
Most people find this extremely difficult for the first time. You have to focus on a point which is different from where you are looking. This is known as "de-coupling" your vision process. Instinctively people focus at the same point they are looking at, and this is the main obstacle in seeing images of this type.
This is why most posters come with a reflective surface such as glass or plastic covering them---if you try to look at your reflection you will be looking at a point twice as far away as the actual poster. It has been noted by almost everyone that while this sometimes helps beginners see the 3D effect for the first (and perhaps even the first few) times, experienced viewers to not need any help like this, and indeed the reflection is usually very distracting and decreases the quality of the 3D effect.
It is generally easier to see Stereograms under bright light. To see stereo images, you need to have "passable" use of both eyes. If you wear glasses try with and without them on. Some short-sighted people can see them easier without their glasses on if they get closer to the picture.
"Richards (1970) Experimental Brain Research 10, 380-388) did a survey among 150 MIT students and noticed that "...about 4% of the students are unable to use the cue offered by disparity, and another 10% have great difficulty and incorrectly report the depth of a Julesz figure relative to background."
But don't dispair, don't give up until you're tried for at least a month!