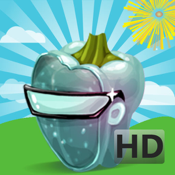 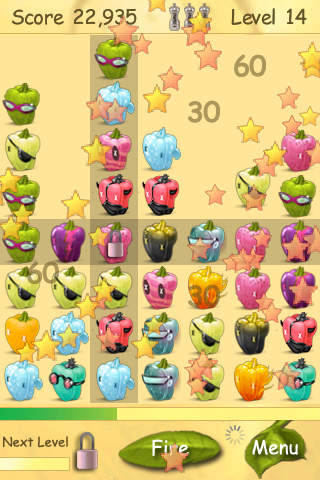 Experience the next addictive game created exclusively for the iPhone, iPod Touch, and iPad. 'Peppers' is unlike any other match-three on the market today. We took the match-three concept and raised it to the next level.

If you enjoy games like, Bejeweled 2, Jewel Quest, Parking Lot, and Falling Gems, then you will love 'Peppers'.

If no mores are possible one of three things will happen. If the next level was unlocked then it will begin. If not and there are still pepper shakers available then one will be used to continue, otherwise the game will end.

Unlike traditional match-three games in which only two game pieces swap places, in 'Peppers' entire rows and columns are moved to match three or more peppers. Once three or more matching peppers are lined up they, along with any adjacent peppers, will begin to shake.