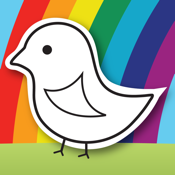 For ages 2-10. 123 Color is coloring fun for everyone, that teaches as you play!

123 Color HD climbed to #1 in education in the US, and has become a Top 10 education app in 35 countries, including Australia, Canada, Germany, France, New Zealand, Malaysia, Korea, Spain, Taiwan, UK, and many more.

123 Color HD is jam packed with features and teaches the following skills:
• Numbers, letters and colors spoken in 13 languages and dialects
• Spelling of numbers and colors in all 13 languages
• Basic shapes including squares, triangles, circles, ovals, parallelograms, and trapezoids
• Compound shapes (iPad only) including cubes, pyramids, cones, wedges, concentric circles, and more
• World maps (iPad only) teach the shapes of our world
• Drawing and painting skills, and artistic expression

Additional features include:
• Freestyle finger painting with Perfect Paint™, a patent-pending technology that keeps kids painting inside the lines
• Handwriting guides for numbers and letters (currently English only)
• 10 world maps (iPad only) include pins identifying the names of capital cities, states, territories, countries, continents, and oceans, and linked to a satellite view of the Earth
• Proper spelling of numbers and color names displayed in any of the included languages
• Optional phonetic spelling of colors and numbers also included
• Engaging sound effects and fun reward music

Music include:
• London Bridges
• Wheels On The Bus
• Mary Had A Little Lamb
• Oh Susanna
• I've Been Working On The Railroad
• Minuet by Beethoven
• Ode To Joy
* plus 16 others

123 Color HD is also a powerful tool for introducing children to foreign languages.

BE SURE TO ALSO CHECK OUT OUR OTHER POPULAR EDUCATION APPS
• KidCalc 7-in-1 Math Fun was named the #1 education app by Babble.com and the best math app by Fast Company magazine.
• 123 Color (iPhone) was the most download education app in March 2010.
• 123 Sticker joined the top 100 education apps list on the day it was released