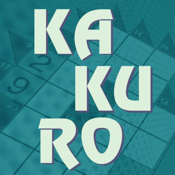 Thanks to the feedback from our users, Version 2.0 is a major improvement in the game play experience and brings a greater sense of reward and achievement to the game. Thanks to everyone who provided suggestions and to the many loyal players of this game.
******

Kakuro CS is an easy to learn logic puzzle game which combines the excitement of crossword puzzles with the challenge of math and logic. The game is very similar to Sudoku but adds a new twist; the numbers you enter in the cells must add up to the totals shown in the row and column headers. Anyone can enjoy this challenging game, but If you've been playing Sudoku and are looking for a new challenge or if you like puzzles of math and logic, then these puzzles are perfect for you.

Kakuro (or Kakkuro - カックロ) is very popular in Japan, second only to Sudoku, although in other parts of the world, it is also referred to by the name 'Cross Sums' or 'Cross Addition'. The puzzles are played in a grid of black and white cells and the object of the game is to completely fill in the while cells with numbers which meet the following requirements:

1. Each white cell must be filled with a number from 1 to 9 inclusive
2. The sum of the numbers entered in each row and column must add up to the total for that row or column as indicated by the number in the black cells
3. You cannot use the same digit more than once in the same row or column

While it is possible to solve these puzzles with a brute force approach, there is only one solution to each puzzle, so a better approach is to find the only combinations of numbers that can fit logically into the correct boxes. For instance, if you have a vertical column with two boxes and a total of 3, the only possible numbers that can be used are 1 and 2, but which one goes in the box? If the horizontal row that this box is in has 2 boxes in the row and a total of 4, then the only options in that row are 1, and 3. Therefore, the only number that can be played in that box is the number 1. By finding the combinations with the fewest possible choices and ruling out numbers that could not be used in the cells, it is possible to solve each puzzle without guessing.

The game includes Options such as:
* 'Auto-complete' - auto fills in the answer where only one possible answer can go. For instance if you have a row with 2 cells in it and a total of 6, if you enter a 5 in one of the cells, this feature will automatically fill in the other box with a 1. The game remembers that the cell is being auto filled, so if you change your entry from 5 to 4, the game auto enters a 2 in the other box instead. If you're satisfied with the auto-completed cell, simply click on it and enter the number to lock it in.
* Auto-Notes Mode - With Auto-Notes Mode turned on, the game will fill in the possible numbers for each cell in the notes field of that cell and keep the possible numbers up to date with each change you make.
* 'Show Starting Hint' - If you need help starting a puzzle, the game will show you one row or column to get you started.
* 'Use Sounds' - A keyboard click sound is made each time you enter a number in a cell. This can be turned off in the settings panel.
* 'Undo' - You can undo your moves all the way back to the beginning of the puzzle. Be careful though, there is no Redo feature, so use this sparingly if you make a mistake and want to go back a few steps.


We're always working to improve our games and add new features. Here are a few of the things we're working on for the next version:
- UI Customization (backgrounds, colors, etc)
- Multiple active games
- Social game features such as leaderboards and challenges with friends