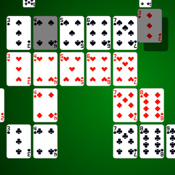 The card is distributed to the player of four people. The player with the card of seven puts out to the place, and begins playing a game from the player that puts out seven of the diamonds. A yellow mark attaches to the player where order has turned.
The frame is displayed on the card that can be put out.

The card that touches about 4 of the cards that have already gone out or four corners can be put out by starting from seven (Neither A nor K are considered to be adjacent).
It was killed, and the player with the card is put out ahead when becoming shape that about four is enclosed to the card that has not been put out. When about about 2 or 3 is enclosed, the card located in the corner and the outside frame is killed.

The player with few cards killed with all members put forth the card completely becomes a win. When the killed number is equal, it is a win that a card on hand disappears previously.

The position can be replaced by dragging it in your cards.
Respectively, AAA･A12 and the button that is permute your cards in the figure priority and the sign priority.

When someone's cards disappears, it is one game end.(GOING OUT)
Other players total the point of remaining your cards, and this is added to the victor's score. A is one point, and JQK is ten points. The card from 2 to 10 : according to the figure.
The score doubles when everything is put forth completely from the state that MELD･LAY OFF is not done at all in order of one degree. (GOING RUMMY)

The card is displayed to 7x5, it turns over from one remaining mountain note, and it puts it. It is possible to go repeatedly by taking the nether card above one one figure. A and K cannot be connected. When it finishes taking all cards before the mountain is done in the tap, the following card is taken, and the mountain note disappears when the taken card disappears, it becomes a win.

The volume of BGM and SE and the difficulty can be set in the OPTION menu.
The value grows by the right side setting of each value.