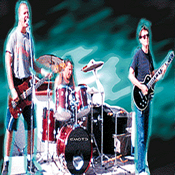 San Diego's best unknown post-proto-pop-punk band; caught between Nirvana and Blink-182, at one time the #1 most downloaded alternative band on mp3.com is now available as an Ultimate Fan App.

People say they started the emo movement with some of their dark yet catchy tracks.

Heavily influenced by Generation X, Clash, Husker Du, and even Van Halen, this band was a little ahead of its time or behind, depending on how you look at it. While everyone was into grunge, these guys were laying the foundation for future pop punk super-stars like Blink and Green Day. Their later tracks went 60's retro and started to sound like a cross between Teenage Fanclub and Weezer.

Emote's greatest strength was its ability to cross all musical boundaries, and yet ironically it was this that kept Emote from developing a larger following. The emo-punk crowd wasn't exactly stoked when Emote played metalish or countryesqe tunes..

Opening for big acts like STP, heavy local radio rotation, and touring regionally was not enough to push them into the mainstream...but the story is not over.

This contains over 20 pop punk tracks for their three albums, unreleased tracks, and some rare wallpaper images of the secretive band who never took pictures.

The rumour is they are getting the band back together and will release a new album in the summer of 2010.