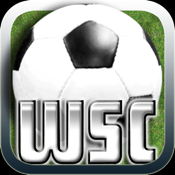 "I really don't think I've enjoyed a footie game this much in many a long year. It's so good that I even made a custom team. I'm not sure if I've ever bothered doing that before - and if I have, it must have more than fifteen years ago." - InvertY.com

With WSC 2010, play the ball you want, when you want. A simple 2 button interface and a flexible after-touch system put all manner of passes, shots, chips and through-balls at your fingertips. It’s up to you to pick holes in your opponents defense, not the computer AI!
Three difficulty/speed levels and a Dribble Assist option to separate the pros from the novices, WSC 2010 has something for every level of footy gamer, old and new.

Take one of 32 nations through a full tournament structure. Use the Custom Team editor to pit your own fantasy creation against the world, or just your friends using the 2-player Link-up mode. (2 Players on 1 device also available)

Fancy a trip down memory lane? Additional team packs allow you to recreate the footballing landscapes of yesteryear and rewrite history via the Historic Tournament mode.

*Link Play*
Play with your friends over Bluetooth or Wi-Fi.

*Two Player*
Introduce your friends to WSC 2010, take them on on a single device!

*International Teams*
WSC 2010 comes pre-loaded with 32 International teams for you to choose from and play with.

*Custom Teams*
Create your very own team of Super Stars.

*Comprehensive Team Editor*
You can edit almost everything about any of Teams in WSC 2010. Kits, Player names, tactics all covered.

*International Tournament*
Play a Tournament against some of the best Countries in the World.

*Custom Tournaments*
Play it your way with WSC 2010, choose any mixture of Teams to play in a Tournament, including custom teams.

*Awards*
WSC 2010 contains 40 Gameplay and Tournament awards for you to acquire.

*Multiple Difficulty Levels*
Ease yourself into the action, until you can take on Hard mode without Dribble Assist. That's how Uprising play!