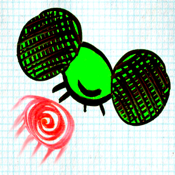 ---Now on sale, 33% off! ---
The DoodelBugz are back, and boy are they angry! Someone said they
were boring, and now they've come to take revenge - and they'll get it
this time. Oh yes. One of them said they called all their friends,
too. Here's what the DoodelBugz said - "Ok, that's it. We brought
our bug friend. Or is he an amoeba? We can't tell, we have bug
brainz".

Flick your finger to shoot the DoodleBugs that are trying to eat you in this frantic action shooter.

This game is also in Artwerkz GameBox

Do you have what it takes to subvert the oncoming DoodleBug swarm?!?!?

Laugh with delight as you shoot
and fend off scores of DoodleBugs!

If you're looking for Paper Toss
on steroids, this game is for you!

* Fifteen different doodlebugs, including one miniboss!

* Rotate the device to make the candy
arch across the screen for flick
and-forget fun!

* Listen to iPod music while playing

* Drag and hold down your finger to
shoot super candy