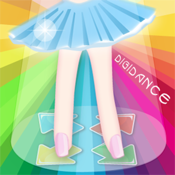 **FREE VERSION**
THE MUSIC GAME REVOLUTION WITH THE RHYTHMIC OF 50000 SONGS**
Digidance is the first Game on the App Store that let you play with YOUR OWN MUSIC. You will not be forced anymore to play over and over again with the same tracks until you get bored or spend money to buy new ones!
Digidance contains the rhythmic sequence of 50000 songs that in the future will be increasingly!!

The game’s goal is to dance to the beat with your fingers. Digidance is innovative, entertaining and fun and let you choose songs from your own library. You can have fun with the songs of your favorite singers!

With Digidance you don’t play just with your music but also with the album covers.
Digidance looks for the album cover's image of the song that you have chosen and will be used for the game's theme.
If the song doesn’t contain a cover image, will be used the highly original digidance cover specially made for you.