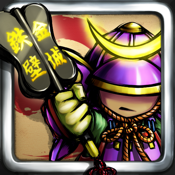 Build your base up from a humble campsite to an impregnable fortress, complete with barricades and turrets! Investing in your castle is vital if you’re to have any hope fending off the Skull Wheel and other massive demons!

Hold off the attacking demons for long enough and your castle will attract the aid of mystical allies. A single attack from one of these Guardian Spirits boasts the power to turn the tide of battle! Guardian Spirits also improve with your fortress; the stouter your defenses, the more powerful your ally!

Reinforcing your castle and successfully destroying a “boss” giant demon has the chance of drawing a new samurai commander to your side! Recruit Oda Nobunaga, Sanada Yukimura, Date Masamune, and more! Each commander has their own special characteristics, and these abilities will prove vital in staging a successful defense!

Each unit will be promoted to an elite class by increasing its level to certain point!

-Taste of The Traditional Japan Art -

Not only the in-depth tower defense game system, Mikado Defenders features the Japan Art taste throughout the game, inspired from such art style as “ukiyo-e” paintings, and “sumi-e” paintings.

- Simple yet strategic game play!
- Intuitive goals: place your troops on the map, fend off attacking demons, and guard your castle!
- Easy controls: deploy samurai, select commanders, and unleash powerful guardian spirit attacks through intuitive taps and flicks!
- Play on your terms: you can suspend games mid-level, and come back to them later, picking up right where you left off!
- Selectable music: enjoy the provided ZUNTATA soundtrack or listen your own tunes!