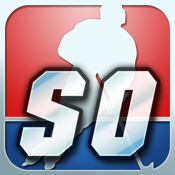 Feed your hockey addiction with some FREE shootout action from the Hockey Nations team!

Can you keep your nerve and score all your shots to win that gold medal? Features 14 national teams and two game modes.

You control the action with the virtual direction pad that offers full 360 degree control as well as the 2 action buttons on the right-hand side of the screen.

For more news on hockey and the game, come and talk to us:
Twitter.com/HockeyNations
Facebook: facebook.com/hockeynations

Promotions running weekly so come and join the fun!

"Best of" Lists
The best hockey games for iPhone and iPad

If you are a hockey fan then check out our list of the best hocky games for your iPhone or iPad2K Sports NHL 2K11 for iPadPrice 099For iPad2k NHL is a hit for iPad users Exper...