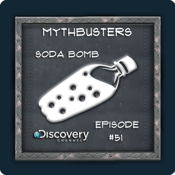 "An all encompassing super-app based on the show. The graphics are incredibly crisp and aesthetically pleasing. This is a truly great app, whether you're obsessed with the show or not." - Macworld

This stand-alone game is based on the popular MythBusters Episode # 57, "Mentos and Soda", where Adam and Jamie explore the theory of chaos when mixing diet cola and Mentos. Play the game by placing the number of mints you think you need in the soda bottle, shake up the bottle by shaking the phone, and angle your iPhone / iPod Touch as you try to spray Buster and cast members towering above. You'll need to aim accurately, adjust your aim with your distance, and be frugal with your mints because it's easy to run out!

Earn more mints by hitting all the targets to unlock more difficult levels. It's not easy so you'll have to adjust your strategy to account for birds, satellite dishes and window fans as you maneuver between buildings to spray your ultimate target. If you run out of mints - SORRY - myth busted!

The game also includes these features:

Also, check out the more immersive app, MythBusters. For a little more money, you get 2 additional games, 300+ minutes of ad-free video, photos, the ability to connect with other friends and fans through Facebook and Twitter, and much more!