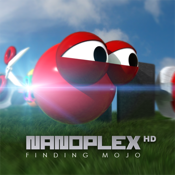 Get ready to collect some Mojo — the life force, you know :)

Created for the iPhone and iPad by fans of games like Supaplex, Nanoplex offers you an addictive game play where you want to complete every level over and over again. The point of the game is very simple — just go out and collect Mojo, beautiful shiny things on the screen (indeed sounds simple, doesn't it?).

But the levels are filled with walls, bombs, enemies and other surprises that will not make your life easier, but guarantee you hours of fun with Nanoplex. And when you get tired of levels that we've included in the game — we have almost 100 additional levels available for you to download and expand your Nanoplex collection.

Nanoplex is an extremely addictive and at the same time — very challenging game (in fact, one of the developers' kids, while playing the beta version, called it "the hardest game ever", but still he earned his name in the About box!). Try it for yourself (since it's free, it doesn't cost you a dime). You will need all your logic, skills and persistence to get through the levels — but in the end it will be all worth it!

FEATURES:
- Did we say it's totally free? :)
- Supports both iPhone and iPad — get once, play on any device
- BTW, it looks awesome on iPad in all its large screen glory (they call it HD version)!
- Built-in 5 tutorial levels explaining the idea, the Universe (Nanoplex' Universe) and everything
- Includes 10 gameplay levels for you to get some Mojo!
- 70 more levels available for purchase — for just 99 cents per 10-level pack via In-App purchase
- Additional extra-large "ABC" level pack with 26 levels — specially for kids! (for the same price as others)
- Stunning 2D graphics and special effects
- Ambient soundtrack created by a professional musician
- Multi-touch controls for both hands
- Ability to watch each level's solution in case you get stuck