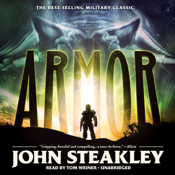 Armor by John Steakley (unabridged) was produced by Blackstone Audio and comes with what is perhaps the best audiobook app available (see below for features list).

The planet is called Banshee. The air is unbreathable, the water poisonous. It is the home of the most implacable enemies that humanity, in all its interstellar expansion, has ever encountered. For the commando forces that are to be dropped on Banshee, special body armor has been devised, the culmination of ten thousand years of the armorers’ craft. A trooper in this armor is a one-man, atomic-powered battle fortress, but he will have to fight a nearly endless hoard of berserk, hard-shelled monsters, the fighting arm of a species that uses biological technology to design perfect, mindless, war minions.

NOTICE: This app includes the same 5-star recording that is available through other retailers for higher prices. It is unabridged and professionally recorded at Blackstone Audio by Earphones Award winner Tom Weiner. You are not buying yet another amateur or volunteer narration. No clicks, background noises, throat clearing, mispronunciations, tinny voices or monotones will be found here.

“The biggest challenge narrator Tom Weiner faces in his performance of Armor is that almost all the characters in this futuristic story hail from different points on the globe… Weiner handles the varied accents so perfectly that he makes it sound easy, certainly easier than his character's mission to destroy an army of giant, intelligent ants. Weiner's skillful interpretation puts the listener in the heat of battle.” —AudioFile

• EXPERIENCE. About 13.5 hours of narration. Created as a Folium enhancedAudio™ edition, this book includes extra functions and features not found on lesser players.

RATING: 12+ For horror themes, and violence.

___________________
Felix is a scout on A-team Two. Highly competent, he is the sole survivor of mission after mission. Yet he is a man consumed by fear and hatred. He is protected not only by his custom-fitted body armor but also by an odd being which seems to live with him, a cold killing machine he calls “the Engine.”