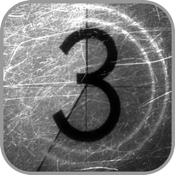 The Reason that this Film Study app exists stems form my own experience studying films in the UCLA archives while attending Art Center College of Design in Pasadena, California. I spent my time studying the 16mm prints from the archive and watched them on a "Moviola" projector. I was able to stop and start the film at will, to make notes and analyze the frames. After about the 20th time watching such greats as "Citizen Kane" or "Double Indemnity," I got pretty good at identifying the director's or cinematographer's intensions. The sound of the film playing though the projector and the intimate focus of the environment gave me the feeling that I was the editor and helped me to study film in a more involved way. It is my hope that this iPad app can help film students and enthusiasts experience some those same feelings.

Some Ideas for using this application on such a fantastic tool as the iPad, come to mind when considering what the iPad can do that a "Moviola" can not. If you are a film student, the opportunities are obvious. You can use the tags available in the notes section as a sort of treasure hunt for attributes that many of the films exemplify. When you are finished, you can email your notes, with screenshots included, to you or your professor. With hundreds of public domain movies available, there are many genres to choose from that contain thousands of examples of the use of style and cinematographic techniques. Film students might even use this app to make notations on their own film or film clips.

If you are a film enthusiast, you can use this app to connect to the world of public domain movies and stream them from anywhere that there is an internet connection. Look for mistakes in the movie and note them for discussions with your friends or just simply enjoy the movies at no cost.

You can also upload your own mp4 films to the app via iTunes. Open iTunes and plug in your iPad. Select the iPad icon in the left menu. Under the "Apps" tap, if you scroll to the bottom, you should see the FilmStudy app. Select the FilmStudy and drag an mp4 movie from your computer to the space to the right. Your movie should transfer to the iPad and be available to it in the upper left movie button of the FilmStudy app under "Local Shared Folder". Remember that DRM (Digital Rights Managed) movie files will not be available inside of the app. The optimum settings for an mp4 file would be: 640x480 pixels at 30 frames per second with a bit rate of 2000kbps. Audio sample rates should be set to 48000Hz AAC encoding with a bit rate of 128 kbps.

Credits and Thanks go out to my friends, family and colleagues. My son Flynn has been a constant sounding board for UI design and coding flow. My son Remi has put up with my many years of obsessions and has given great feedback about my work.

The writings in the notes section were written by Michael Raine and Mariano Prunes. Thanks to Yale University Film Studies Program for their support.

Note: Only Wifi streaming is allowed on this version.