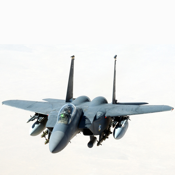 The first and best 3D air combat game for the iPad!

Coming soon: multiplayer support that lets you and your friends team up to combat aliens or fight it out between yourselves!

The iPhone / iPod Touch version of Defendroid received comments like "This is a great game. Excellent graphics and the controls were easy to master right from the get go." and "Best app on the app store" ... and the iPad version is even better!