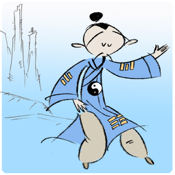 Taichi Chuan, the most popular Kong Fu (or Kung Fu) Style around the world.

Original from China, Tai Chi (Taiji) Chuan (太极拳) is also called “philosophical Chuan,” meaning that its principles and techniques contain the idea of Tai Chi which is a systematic thought of balance.
This form was the result of an effort by the Chinese Sports Committee which, in 1956, brought together four Taichi masters to create a simplified form of Taichi as exercise for the masses. The creators truncated the traditional Yang family hand form to 24 postures; taking between four and eight minutes to perform and to give the beginner an introduction to the essential elements of tai chi chuan, yet retain the traditional flavor of Yang style's longer hand forms (generally 88-108 postures). The order of movements does not follow the traditional form, the principle is from simple to complicated, from easy to difficult.
This form was promoted by the People's Republic of China for general exercise, and was also taught to internees in Communist "re-education" camps.


In this App, you can explore into detailed descriptions & illustrations on each step, in addtion to these helpful information, we also provide 55 minutes long step by step audio instructions.

This can be your personnal coach(Shifu) to learn and practice Taichi Chuan, to build your body and free your mind and relax yourself from daily stressful working.

Features:
* Detailed information on each step, including illustrations and audio instructions.
* Continuous Illustration for a whole picture of the 24 step Taichi.
* Continuous Audio Guidance on practicing.
* Remember your learning progress.

For instruction on the app, Please view info.

Support:
If you have any technical problems please email us at SUPPORT@FEETAN.COM before you post a review.