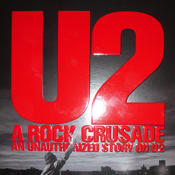 iPad Optimized - U2 Rock Crusade is the story of the band's never-ending energy, drive and commitment to social causes and of a charismatic showman's efforts to influence politics to change world policies and bring an end to poverty, hunger and social injustice. Part of what also makes U2 so special is the band's original lineup remains in tact: Paul (Bono) Hewson, Larry Mullen Jr., Dave (The Edge) Evans and Adam Clayton are family. If one member is unable to play, the band postpones a concert rather than substitute their 'brother.' Another reason they have captured the imagination of music lovers around the globe is their dedication and special relationship with fans. More than 33 years and 170 million album sales later and with more Grammy Awards than any other group in history, it's hard to believe U2 began as a teen-aged 'kitchen band' in Ireland in 1976. As well known for philanthropy as music, lead singer Bono is a tireless worker for social and economic change in Third World Countries. U2 A Rock Crusade - An Unauthorized Story on U2.