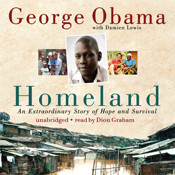 HOMELAND by George Obama (unabridged) was produced by Blackstone Audio and Buck 50 Productions, and it comes with what is perhaps the best audiobook app available (see FEATURES, below).
____________
The father that the brothers shared was as elusive a figure for George as he had been for Barack Obama; he died when George was six months old and George was raised by his mother and stepfather. But after his mother and stepfather separated, he drifted into gangs and petty crime. Arrested for robbery, restless, willful, and troubled, he lost himself in
Nairobi’s vast Mathare ghetto. After being framed for an armed robbery he did not commit and spending time in jail, he represented himself at trial and won the case. Vowing to turn his life around, he finished his education and set up the George Hussein Obama Homeland Foundation to help street kids overcome the miseries surrounding them.
____________
Self-contained, this audiobook app is perfect for your commute, on a trip, or while relaxing. Based on a library-quality recording, this app was built especially for your iPhone and iPod Touch. No unreadable text, no endless scrolling. The audio is of higher-than-normal quality, making for a great listening experience that will not tire your ears or grate on your nerves.

NOTICE: This app includes the same 5-star recording that is available through other retailers for higher prices. It is unabridged and professionally recorded at Blackstone Audio by Audie Award winner Dion Graham. You are not buying yet another amateur or volunteer narration. No clicks, background noises, throat clearing, mispronunciations, tinny voices or monotones will be found here.

“[Homeland] is worthy for lots of reasons. The blood relationship with Barack is way down on the list of those reasons. The memoir stands on its own nicely as a coming-of-age story set in an African nation.” –The Christian Science Monitor

• EXPERIENCE. About 9 hours of narration. Created as a Folium enhancedAudio™ edition, this book includes extra functions and features not found on lesser players.

RATING: 12+ For discussion of mature situations.

___________________
George Obama’s story describes his unique struggles with family, tribe, inheritance, and redemption and the seminal influence his brother had on his own future.