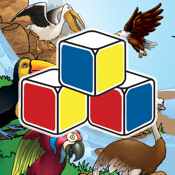 The iCount-to-10 app was created to help parents and caregivers teach children from 1 to 5 years old to count to 10. By playing this game with your children, they will learn the first steps in addition, as well as the names and real sounds of 40 popular animals. With the app comes the ChildUp Early Learning Method, which provides precious information on brain development, early learning, and parenting expertise.

====================
PURPOSE: iCount-to-10 was specifically designed as an educational tool for parents and caregivers to interact with their children from 1 to 5 years old. By playing with iCount-to-10, your children will not only learn numbers as quantities and symbols, and the first steps in arithmetic, but they will also develop a lot of important skills: math and logic skills, learning and cognitive skills, listening and memory skills, attention and concentration skills, and language and social skills. To be efficient, however, iCount-to-10 should not be used by children alone. The true power of the application lies with the caring and intensive guidance of an adult.

EARLY MATH LEARNING: In teaching to count with iCount-to-10, you can test your children through 7 levels of difficulty in 4 series of 10 different animals. The goal is for your children to learn the 10 single digit numbers and to count up to 10, in counting progressively up to 3, then up to 5, and so on. Then you can also train your children to count in a random or incremental order, and choose when to add zero, the ‘special’ number, as part of the counting series.

VOCABULARY DEVELOPMENT: In addition to teaching how to count to 10, iCount-to-10 will let you share with your children a lot of interesting discussions about the 40 animals represented in the game (each of them being the object of a short description in the app). While playing with you, your children will - almost automatically and probably with great pleasure - discover and learn a lot of new vocabulary, and be able to recognize the real sounds of each animal.

CHILDUP EARLY LEARNING METHOD: iCount-to-10 includes the first part of the ChildUp Early Learning Method. The method was invented, developed, and practiced by John and Alan Debonneville, father and son, who dearly love mathematics and logic. John began to apply the principles and techniques described in the method with his son when the boy was still a baby, up until the time he was a teenager. The outcome was so positive that Alan and John thought it would be helpful for other parents to know about this successful early learning and teaching experience. The ChildUp Early Learning Method provides practical information from real-life situations and families, backed up by leading scientific research from the past 10 years. It presents some new concepts related to early childhood education where parents can play a critical role as both mentor and teacher to their children’s greatest benefit.

CHILDUP COMMUNITY: To learn more about the practical uses of iCount-to-10 by parents from all over the world, check out the ChildUp Community. You can get new parenting tips, read testimonials, watch videos and more! Visit www.childup.com/CELT.