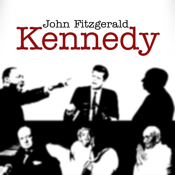 Kennedy was assassinated on November 22, 1963, in Dallas, Texas. Lee Harvey Oswald was charged with the crime but was shot and killed two days later by Jack Ruby before he could be put on trial. The FBI, the Warren Commission, and the House Select Committee on Assassinations concluded that Oswald was the assassin, with the HSCA allowing for the probability of conspiracy based on disputed acoustic evidence. The event proved to be an important moment in U.S. history because of its impact on the nation and the ensuing political repercussions. Today, Kennedy continues to rank highly in public opinion ratings of former U.S. presidents.

FEATURES:
- All the information you need about JFK: early life, military service, political career, social life and family and the assassination.
- JFK quotes to read and to send by email.
- A gallery of fantastic images of JFK to browse and send by email as postcards.
- Video collection of JFK, his family, the assassination, etc. (video requires internet connection).