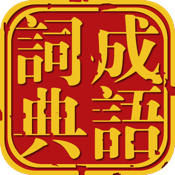 Chéngyǔ (simplified Chinese: 成语; traditional Chinese: 成語, literally "set phrases") are a type of traditional Chinese idiomatic expressions, most of which consist of four characters. Chengyu were widely used in Classical Chinese and are still common in Vernacular Chinese writing and Spoken Chinese today. According to the most stringent definition, there are about 5,000 chengyu in the Chinese language, though some dictionaries list over 20,000.
They are often referred to as Chinese idioms or four-character idioms; however, they are not the only idioms in Chinese.
Chengyu are mostly derived from ancient literature. The meaning of a chengyu usually surpasses the sum of the meanings carried by the four characters, as chengyu are often intimately linked with the myth, story or historical fact from which they were derived. As such, chengyu do not follow the usual grammatical structure and syntax of the modern Chinese spoken language, and are instead highly compact and synthetic.

- Free search: Type a part of an idiom's bopomofo or some of characters included in your idiom.
- Polyphones supported in Free search.
- Idiom explanation: the syntax, examples, the source, synonyms, antonyms and the bopomofo and strokes for every character included in idioms.
- Write your notes for idioms.
- Bookmarks supported.
- Recents (this feature can be disabled in settings view).