Behind the Scenes of Total Hell 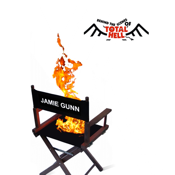 Behind the Scenes of Total Hell A film by Jamie Gunn

To envisage "Behind the Scenes of TOTAL HELL", imagine "Ed Wood" directing the characters from "The Office" in a dodgy "Spinal Tap" music video...

A hilarious low budget mockumentary, documenting hapless filmmaker "Jamie Gunn" as he attempts to produce a horror movie. Follow Jamie and friends from the initial pitch of the movie, to the premiere upon its completion.

Along the way Jamie loses his actors, friends and eventually - the plot. A modern day comedic tragedy that will appeal to movie buffs, film insiders and anyone who likes a good laugh! Complete with stick throwing, sausage wielding and (of course) Gorilla Dogs, Behind the Scenes of TOTAL HELL is the film for you.

This film is not rated.

In association with Stonehenge Productions