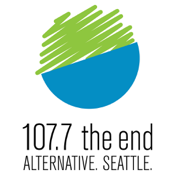 107.7 The End is Alternative Seattle. We’ve been leading the way to music discovery since the very beginning.

About 107.7 The End - KNDD:
On August 23, 1991, “The End” was born. KNDD’s sign-on came at a particularly fortuitous time in both the Seattle and national music scenes. Within six weeks of The End’s first broadcast, three iconic albums by local artists – Nirvana, Pearl Jam and Soundgarden were released. These artists helped to define the Seattle Sound and cement the Emerald City’s role in music history. The End also quickly became one of the most influential alternative radio stations in the world and continues in that role today.