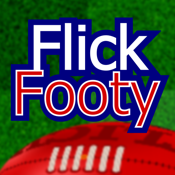 *** If you love your footy and have an iPhone or iPod, what are you waiting for? ***

Take a look at what people are saying about Flick Footy if you're not convinced:

"This game is going to be in the top 25! Not just the best AFL game but the best sports game i have and i love sport games! You wont get bored 5 star!" - Slymitch, 27th April

"The game is easily the best footy game on the app store and it is one of my very favourite games." - Mertzbro, 19th April

Featuring realistic ball physics that let you snap a checkside from the boundary or boot a torpedo from outside fifty, Flick Footy is much more than a simple flicking game!

With an interface that changes colour depending on your allegiance, you'll be able to show of your team colours proudly even before you send your team to the top of the online ladder! Hone your skills in the single player modes with 'Streak' and 'Mad Minute', or challenge your mate to a game of 'H.O.R.S.E.' or 'Match Up' at the quarter-time break (sharing the same device).

Other features include a lush, fully 3D stadium and authentic crowd sounds to set the atmosphere. Realistic wind modelling will carry the ball just like it should, and a special training mode lets you practice your kicks from exactly where you want to!

We want Flick Footy to be the best Aussie Rules game available. If you think we can improve it, PLEASE tell us how so that we can achieve our goal!

* Realistic ball physics - change your hold on the ball to kick drop punts, bananas and huge torpedos!
* Lush 3D graphics.
* 5 different game modes including goal streak and old favourites such as H.O.R.S.E. (to be played against a mate).
* A 3D overhead view that lets you pick where to take a shot from!
* Realistic wind effects - take aim at a post to allow for a crosswind.
* Choose your team colours and watch as the interface changes to show your support.
* Your top score goes towards an online Grand Total for your team. Help your team to the top!