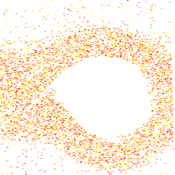 es1_XL is a one dimensional simulation of the interaction between two (infinitely long) electron beams moving in opposite directions. The observed behavior is commonly known as the two-stream instability. es1 was created long ago (~1970) by A. Bruce Langdon and is fully documented in the book Plasma Physics by C. K. Birdsall and A. Bruce Langdon, McGraw-Hill, 1985.

This is an iPAD version of es1 for iPhone/TouchPad. It utilizes the greater screen area and pop-up menu features of the iPAD. The horizontal view, in particular, provides more simultaneous information to the user than is possible in the iPhone/TouchPad implementation.

The opening view is a phase space plot of velocity versus position. The two beams will gradually evolve into a rotating donut shape which is characteristic of the instability. The energy versus time plot shows the evolution of the field energy. Initially it grows exponentially; it turns over and levels out once the system becomes non-linear, just as the donut forms.

The window "Model" displays certain parameters for the two species. These can be changed, but take care as minimal checking is done. The parameters are defined as follows:

There are two non-specie parameters:

Both gestures only affect the x versus v plot. A one finger gesture moves vmin up or down; vmax is not changed. A two finger gesture (pinch) will zoom in the y ( here, v) direction.