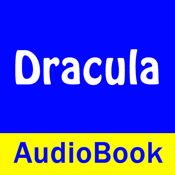 The classic vampire story by Bram Stoker revolves around a struggle between good and evil, tradition and modernity, and lust versus chastity. The author didn’t invent vampires, but his novel has so captured the public’s imagination that he is rightly considered their popularizer.

In this audio book, you will meet not only the Count himself, but heroes Jonathan Harker and Abraham Van Helsing, plus an array of madmen, psychiatrists, and fair maidens who cross paths with the fanged menace.

Written in 1897, Bram Stoker's Dracula is, hands down, the greatest horror novel ever written. In addition, it is also an enduring classic of literature. The most striking characteristic of Stoker's masterpiece is its solid grounding in late 19th-century Victorianism.

It is a classic of fiction, fascinating for its subject matter and still the subject of films a hundred years later. Count Dracula, the epitome of evil, is exotic enough to keep even the most jaded reader of his exploits interested in their outcome, and grounded enough in the reality of evil to make even doubters wonder whether evil can be transmitted from one person to another against one's will.

The novel begins with the arrival of Jonathan Harker, a lawyer representing a London real estate agency, at the Transylvanian castle of Count Dracula to clinch the deal by which the count will move to a British estate.

Details about Harker's arrival by coach, his greeting at the castle, which has no doors except the front door, his reception by the count, and his instructions regarding where he may go or not go within the castle set the tone and establish the mysterious background of the count and a sense of dread regarding the outcome for Harker.