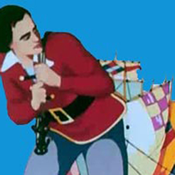 This multi-function app contains over 1 hours worth of film content.

* Once downloaded this self-contained 'film in an app' does not require a Wi-Fi or 3G connection to be viewed.
* Fully functioning TV episodes / Films within the app
* Synopsis page / information page function within the app
* Director biography page

Gullivers Travels is the 1939 animated film by the Fleischer Studios. Gulliver wakes on a beach after being ship wrecked. He finds he has arrived on the island of Lilliput, which is inhabited by tiny people. They take Gulliver for a giant, due to his size difference over them, and they try to capture as such. Adventures ensue, until Gulliver finally makes his peace with the Lilliput people. This was only the second animated feature film ever released, the first being Disneys Snow White and the Seven Dwarfs, and is a classic piece of animation.