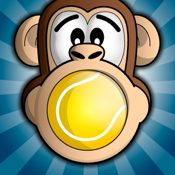 Monkey Tennis is a gesture controlled Tennis game played entirely using monkeys. Using swipes and flicks to run and play a variety of shots, it's the most fun, addictive and amusing tennis game available for your iPhone.

1. The controls for Monkey Tennis replicate tennis shots as swipes. They may take 3-4 games to master, but they are what make the game great and worth the effort.

2. For an easier start play as Silverback against Aye-Aye, Howler or Gelada - on a Clay surface.

Monkey Tennis is rendered in 3D, and uses an advanced 3D physics engine, so it is also a very realistic tennis experience - despite the fact that you might be playing against a Chimpanzee.

You can swerve the ball, play lobs, drop shots, volleys, accurately aim your shots and vary power, all with simple swipe gestures.

All of this can be done on grass, clay and hard courts - which all have their own attributes. There are also over 30 monkeys to play with, each with their own skills levels, style of play.

How will you handle a Gibbon that plays from the baseline? What about a serve and volleying Gorilla? Easy? Well wait until you meet an Orangutan that serves like Andy Roddick.

* 3D physics and visuals
* Gesture based controls: swipe to run, or play a shot.
* Flick and move in 360 degrees
* Volleys, drop shots, lobs, swerve
* Over 30 unique monkeys.
* 3 different surfaces, each with different characteristics
* Saving for each game mode, so you can have a knockout, league and more all in progress at the same time.
* settings: games per set, sets per match, sound on/off, surface type.

REVIEWS
"the best tennis game on the platform. With or without monkeys." squarezero, toucharcade.com

"without question best tennis game on the device" Gabrien, toucharcade.com

"Bought this yesterday and I have to say it is one of the best games on the platform... A bit difficult at first but a good way to get an easy start and accelerate your learning curve is to play against Aye-Aye: the creature can't run across court for the life of him! Thanks for a great game, dev, and for daring something different." Jeep, toucharcade.com