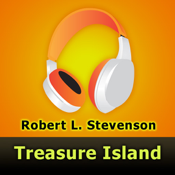 ABOUT THE BOOK:
A mysterious map, pirates, and pieces of eight! When young Jim Hawkins finds a map to pirates’ gold he starts on an adventure that takes him from his English village to a desert island with the murderous Black Dog, half-mad Ben Gunn, and of course Long John Silver.

Treasure Island is an adventure novel by Robert Louis Stevenson. First published as a book in 1883, it was originally serialized in the children's magazine Young Folks between 1881-82 under the title The Sea Cook, or Treasure Island.

Traditionally considered a coming-of-age story, it is an adventure tale known for its atmosphere, character and action.

This book is a LibriVox recording. We support the LibriVox project.