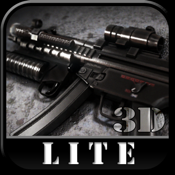 The Heckler & Koch MP5 is a 9mm submachine gun of German design, developed in the 1960s by a team of engineers from German small arms manufacturer Heckler & Koch. The primary version of the MP5 family is the MP5A2, which is a lightweight, air-cooled, selective fire delayed blowback operated 9x19mm Parabellum weapon with a roller-delayed bolt.

Best of all, it's now available for your iPhone or iPod in full interactive 3D!

Featuring:
✓ MP5 spoken video Showcase
✓ 3D control – interact with the MP5 from all angles with automatic and single round firing modes
✓ Interactive slide control & release
✓ Safety switch and mag release
✓ Muzzle flash, smoke, recoil and explosions
✓ Shell discharge (full and empty)
✓ Authentic sound effects for all actions
✓ Zoom in and out any anytime (even while firing)
✓ Auto orbit around the gun (while remaining fully interactive)
✓ Unlimited ammunition mode
✓ Bullet time - watch as rounds eject from the MP5 in slow, and ultra slow motion

Having been adopted by numerous law enforcement agencies and special forces groups, the MP5 remains one of the most widely used submachine guns in the world. See why for yourself!