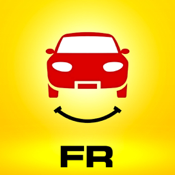 iSpeedCam France has an impressive speed trap database covering only the region of France. The world-wide version covers the European Countries, UK, USA, Canada, Australia, New Zealand, and all Asian countries. Nevertheless, we are aware that there are no official camera databases, and the available traffipax databases either show superfluous camera locations or lack them all together, regardless of their claim. iSpeedCam allows you to tailor the camera database with one touch by adding new cameras or filtering out the unwanted ones. Later on, you can backup and restore these cameras directly from your device.