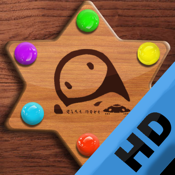 Chinese Checkers? Does this game originate from China? The answer is obviously "NO"! The game itself was invented in Germany in 1893 under the name "Stern-Halma", as a variation on the older American game of Halma. The name "Chinese Checkers" originated in the United States, as a marketing strategy by J. Pressman & Co. in 1928. In the 1930s a craze for Chinese Checkers swept across America. Several other manufacturers started to make the game. Many were given other names; but since no one seemed to own the rights to the name; many were just called Chinese Checkers. Why this happened is still unanswered. No matter what, let's start playing Chinese Checkers!

****************************
In order to become a popular game, market research and understanding of players' preferences are very critical. How could we turn an ordinary into an extraordinary? How could we persuade players to be addicted to our game? Let's expose our Five impressive CHARACTERISTICS of our Chinese Checkers.

1.Our Chinese Checkers with a smooth operation and a gorgeous layout, so that you could recall your childhood memory with joy and happiness.

3. 6-Players Challenge & 2-Players Bluetooth Match
Chinese Checkers should not be an one-person game. As such, we are offering a Pay version which allows a challenge up to 6 players or computers by using a single iPhone or iPod touch. Having fun with friends and competing the brainpower among yourselves are the most excellent point of our Chinese Checkers!

5. Built-in Favorite Music Player
While you play our Chinese Checkers, you could also listen to your favorite music by simply tapping an icon on the screen. Then you could choose your own song from your iTunes Library. There is no interruption to the game at all. Switching songs is extremely simple, just shake your device! But no worry, your marbles won't run!

6. HK-Styled Classic Theme Board
To be a privileged consumer, the Pay version offers an extra theme board, the HK-styled classic one for you. It's now time for retrospection!

With various elements, our Chinese Checkers is more entertaining and more extraordinary!! Life is random, PLAYMORE!!