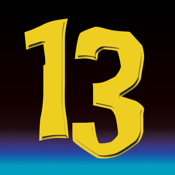 This multi-function black and white film app contains over 60 minutes worth of content.

* Once downloaded this self-contained 'film in an app' does not require a Wi-Fi or 3G connection to be viewed.
* Fully functioning TV episodes / Films within the app
* Synopsis page / information page function within the app
* Director biography page

A horror / thriller based film released in 1963.
A young woman motivated by greed is the cause of her husbands heart attack which then leads to his death. After the incident she tries to get herself written into her rich mother-in-laws will and takes a trip to her late husbands castle in Ireland. Her plans soon come to a sudden end when a crazed mad-man begins to stalk and murder members of the family.