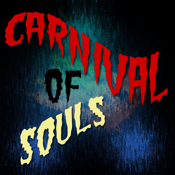 This multi-function black and white app contains over 60 minutes worth of film content.

* Once downloaded this self-contained 'film in an app' does not require a Wi-Fi or 3G connection to be viewed.
* Fully functioning TV episodes / Films within the app
* Synopsis page / information page function within the app
Director biography page

First produced in 1962 as a low budget horror film and directed by Herk Harvey, this film is now known as a cult classic and is sometimes shown at local halloween and film festivals.
The story begins when three female friends are challenged to a drag race by a group of boys. The race ends when the boys car nudges the girls’, into a bridge railing which collapses, leaving the car to plunge into the river. It appears all three girls have died, until one, Mary Henry, mysteriously emerges from the wreck.
Mary travels to Salt Lake city in a bid to continue with her life, she takes a job as an organist at the local church, despite the fact that she isn’t religious.
As the film progresses Mary see’s visions of a fellow tenant and is also haunted by organ music, quite different from the wholesome tunes she plays. During a car journey she can find nothing else on her car radio other than this haunting music. Before long Mary’s life becomes a blur between the living and the dead