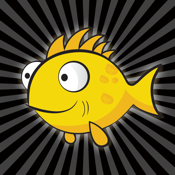 In the beginning the Universe was created. This made a lot of people very angry and has been widely regarded as a bad move. Many meetings took place and many experts were called in to figure it out, and soon nobody could understand what the experts were all talking about and things appeared to be hopeless. Thankfully, it was just then that a tiny creature was discovered in the backwaters of the planet Zorkom: The Babel Fish. This miraculous little fish could translate thought impulses directly into local languages. Initially, the Babel Fish had to be inserted inside your ear canal to understand what people were thinking but fortunately there's no need for such unpleasantness anymore. From your iDevice - and an internet connection - the Babel fish can work its magical translation skills back on Zorkom.


IMPROBABILITY TRANSLATOR
The improbability translator is the result of a research project after it was discovered that Sherpa's on Mt. Everest were unable to understand people in-spite of being fluent in several languages. It turned out that the process of translation was a much more trickier business than anybody had realised. The improbability translator is designed to work around this problem by reconverting the translated output back into your own native language. To be absolutely clever, it does this after converting your message through 56 other languages as well. There is no guarantee of it working but there is also no guarantee of it not working so the next time you are really stuck in a difficult spot this may be a helpful option. Caution: Nobody has quite figured out why but it seems to work more efficiently with questions.

REVERT-O-MAT
Did you ever wonder what’s the result of the translation? Maybe instead of ordering a chinese dish at the restaurant you asked to marry the daughter of the chef? Our latest edition brings back your input of the foreign language in one easy step. Fine-tune it till you are ready for fried rice with spicy chicken!

DISCLAIMER
This application is in no way connected to Yahoo or their translation project and any resemblance or their ideas or work can only be the result of sheer cosmic coincidence. The purpose of this application is just for fun and to lightly borrow from the framework of the classic book "The Hitchhiker's Guide to the Galaxy" written by Douglas Noel Adams. If you have a thought you would like to share about this matter or anything else, write to us.