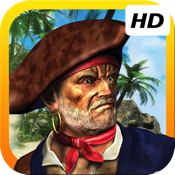 Four years have passed since the end of the adventure recounted in Robert Louis Stevenson's novel.

Jim Hawkins has become an upstanding adventurous young man, attentive to those around him. Imagine his surprise when, one morning, he sees a parrot enter his bedroom window : none other than Captain Flint, Long John's own companion. The bird brings him a message from his master.

In the message the old pirate announces that he has buried a marvelous treasure on the secret isle where he retired : Emerald Island.
Jim is going to have to hurry though. Pirates, old enemies of Long John, are on his trail.

Features:
- A thrilling quest: Set out in search of the incredible treasure. The sequel of R.L. Stevenson's adventure: A tale that has fascinated millions of readers for years!
- A varied, exotic environment. Highly coloured and detalied graphics to give you a real taste for travel.
- A treasure trail: Danger at every turn, to keep you in suspense for hours.
- A innovative game system: An interactive inventory using object combinations and a new system of knot puzzles.
- Dozens of fascinating enigmas: Resolve them or never reach the treasure.
- Dialogs and Videos in english, german, italian, french, spanish, russian and polish languages.
- Texts and Subtitles in english, german, italian, french, spanish, russian, polish, czech and hungarian languages.


DON'T FORGET TO CHECK OUT OUR OTHER FANTASTIC ADVENTURE GAMES!

On Mac, iPad, iPhone:
Nicolas Eymerich Inquisitor - Book 1: The Plague
Amerzone The Explorer's Legacy
Atlantis 2: Beyond Atlantis
Atlantis 3: The New World
Atlantis 4: Evolution
Atlantis 5: The Secrets of Atlantis - The Sacred Legacy
Aztec The Curse in the Heart of the City of Gold
Dracula 1: Resurrection
Dracula 2: The Last Sanctuary
Dracula 3: The Path of the Dragon
Dracula 4: The Shadow Of The Dragon
Egypt 2: The Heliopolis Prophecy
Egypt 3: The Prophecy
Jules Verne's Journey to the center of the moon
Jules Verne's Mystery of the Nautilus
Jules Verne's Return to Mysterious Island
Jules Verne's Return to Mysterious Island 2
Louvre The Messenger
Necronomicon: The Dawning of Darkness
Nostradamus The Last Prophecy
Road to India Between Hell and Nirvana
Nicolas Eymerich Inquisitor - Book 1: The Plague
Versailles 2