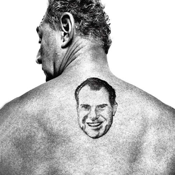 Roger Stone is a legendary American Republican political consultant who has played a key role in the election of Republican presidents from Richard Nixon to Ronald Reagan to George H. W. Bush and George W. Bush.

Stone is credited with the public relations rehabilitation of President Richard M. Nixon after his resignation in 1974. Stone first worked for Nixon as Chairman of Connecticut Youth for Nixon/Agnew in 1968 and graduating to a position in Nixon's 1972 reelection campaign which won 49 out of 50 states.

In 1976 Stone was named National Director of Youth for Reagan, a division of Governor Ronald Reagan's 1976 Presidential campaign. In 1978, Stone co-founded the National Conservative Political Action Committee [NCPAC] where he is credited with developing the negative campaign into an art form and pioneering the use of negative campaign advertising which Mr. Stone calls "comparative, not negative."